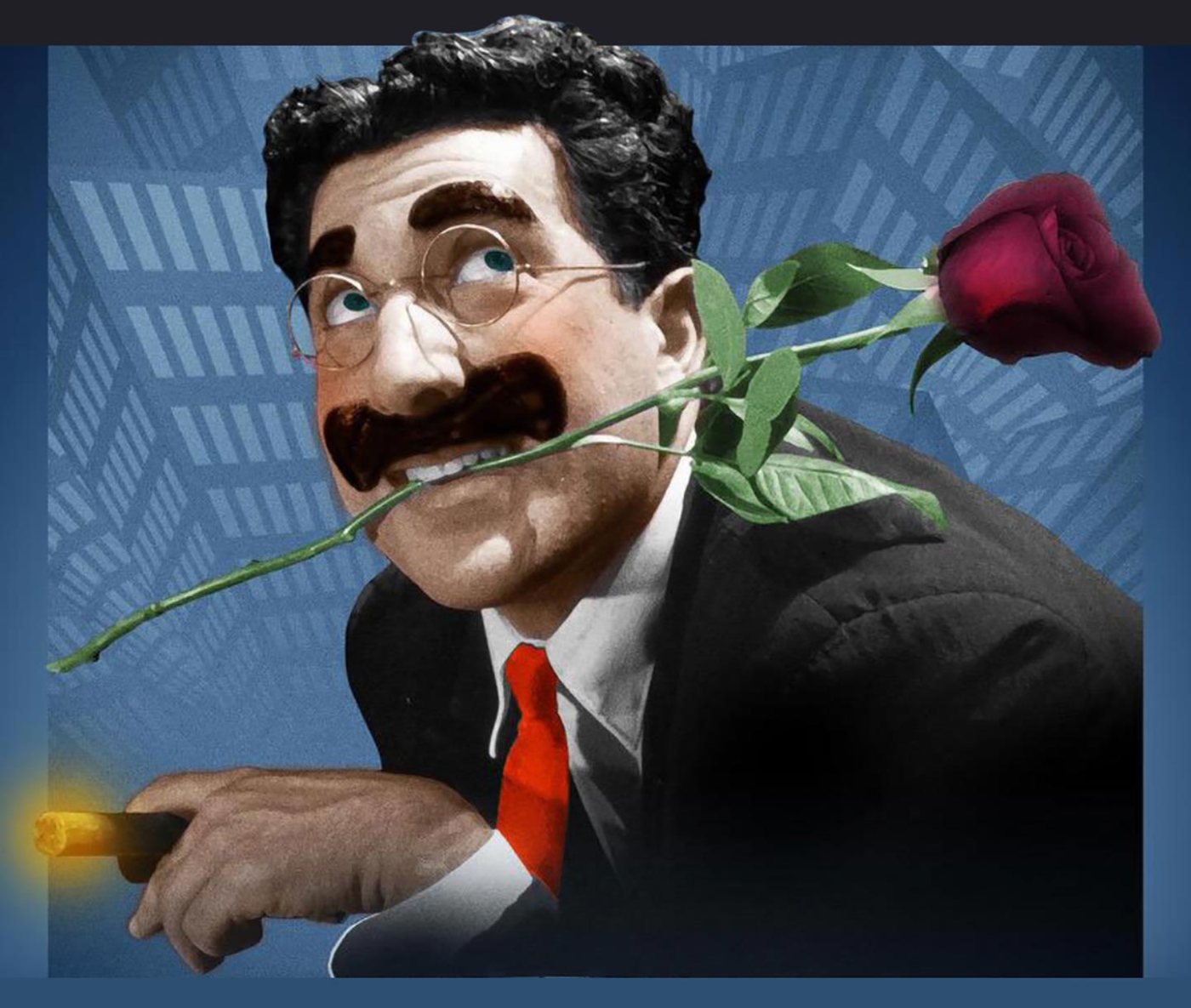 I spent a most enjoyable evening with Groucho Marx the other night. Yes, he’s been dead for well over four decades now, but his spirit lives on in writer/actor/director/producer Frank Ferrante, someone I’ve known for close to three decades (that’s a lot of decades for one paragraph). A new filmed version of Frank’s wonderful one-man show (two-man if you include musical accompanist Gerald Steinback, and you probably should) is now making the rounds on PBS and is also available as a DVD. Compiled from a quartet of filmed live shows, An Evening With Groucho has been performed by Frank over 3000 times in more than 500 cities over 35 years … and I can guarantee you each time was different and special in its own way.

I first encountered Frank 25 years ago on a visit to New York City when I saw an off-Broadway revival of The Cocoanuts, which originally featured the Marx Brothers in the 1920s. The night I was there was also the final game of the 1996 World Series and Frank, as the Groucho character (“Mr. Hammer”) in the George S. Kaufman play, kept coming on stage with score updates (spoiler alert: the Yankees swept the series in four games). I was amazed at his portrayal of Groucho, so much so, that I wrote about it in my all-Marx Brothers issue of my self-published comic book Innocent Bystander (more on that here). And lo and behold, Frank wrote ME a fan letter, after Marx Bros. uber-collector Paul Wesolowski slipped him a copy of IB:

“I’ve been featured in hundreds of publications—the New York Times, the London Times, you name it—but nothing has thrilled me more than your inclusion of me in your Marx Brothers issue … The world of comics and MAD magazine is what first inspired me. Soon after came the Marx Brothers. Thanks for bringing it all together for me with IB3.”

It was right around then that I actually met Frank in person, at a gathering of Marx Bros. fans at the aforementioned Paul Wesolowski’s memorabilia-studded home in New Hope, PA, which also included Groucho’s daughter, Miriam Marx. And to this day, Frank remembers me each time I see him, which I find amazing since he must encounter thousands of people each year in his Groucho appearances and his long-running role of The Caesar in the cabaret/circus/dinner theater production Teatro ZinZanni. I’ve seen Frank as Groucho three times now over the past 15 years or so, in Escondido, San Francisco, and Solana Beach (all in California); in fact he heads back to Solana Beach on May 2 and 3, when I will—sadly—be out of town. (He may be heading to a town near you; click here to see his Evening with Groucho tour dates.)

But if you’re not able to see him live, the next best thing is the new filmed version of An Evening with Groucho, now appearing on PBS, and called simply Frank Ferrante’s Groucho. Directed by Dreya Weber, this film totally captures the experience of seeing Frank as Groucho. The production is part journey through Groucho’s career, part insight into what Groucho means to Frank, and—best of all—his interaction as Groucho with the audience. It’s the thing that makes every performance different. Frank really channels Groucho when he ad libs with the audience, often singling out a few lucky (if slightly mortified) good sports to come back to again and again during the course of the show.

In this filmed version of the play in Cincinnati, OH, it’s Bonnie and Terry, a couple married for 49 years, and Frank’s interaction with them is priceless, seamlessly going from his scripted portrayal of the Groucho we know and love from the movies to simultaneously channeling the Groucho we know and love from his TV series, You Bet Your Life, in which he interviewed ordinary people and made gentle—and sometimes not-so-gentle—fun of them. While Frank keeps on his “Movie Groucho” make-up the entire time (glasses with grease-paint mustache and eyebrows), it’s these moments with the audience that evoke the elder Groucho’s decade-long TV stardom.

If you can’t see Frank as Groucho live, this PBS broadcast is the next best thing, as close as you might get to both Frank and the real (long-dead) Groucho. Here’s a list of the PBS stations showing Frank Ferrante’s Groucho with its premiere date and if you can’t find it, you can order a DVD for $20.00 plus $5.00 shipping (CHEAP!), which also includes bonus material featuring interviews with Frank and the director, Dreya Weber, and the impact legendary actor Hal Holbrook, who pioneered this whole one-man show thing with Mark Twain Tonight, has had on Frank. Oh, and when you order the DVD, tell them Garo sent you. (That’s me.) Frank may even autograph it for you!

My very own DVD copy of Frank Ferrante’s Groucho … autographed, no less!