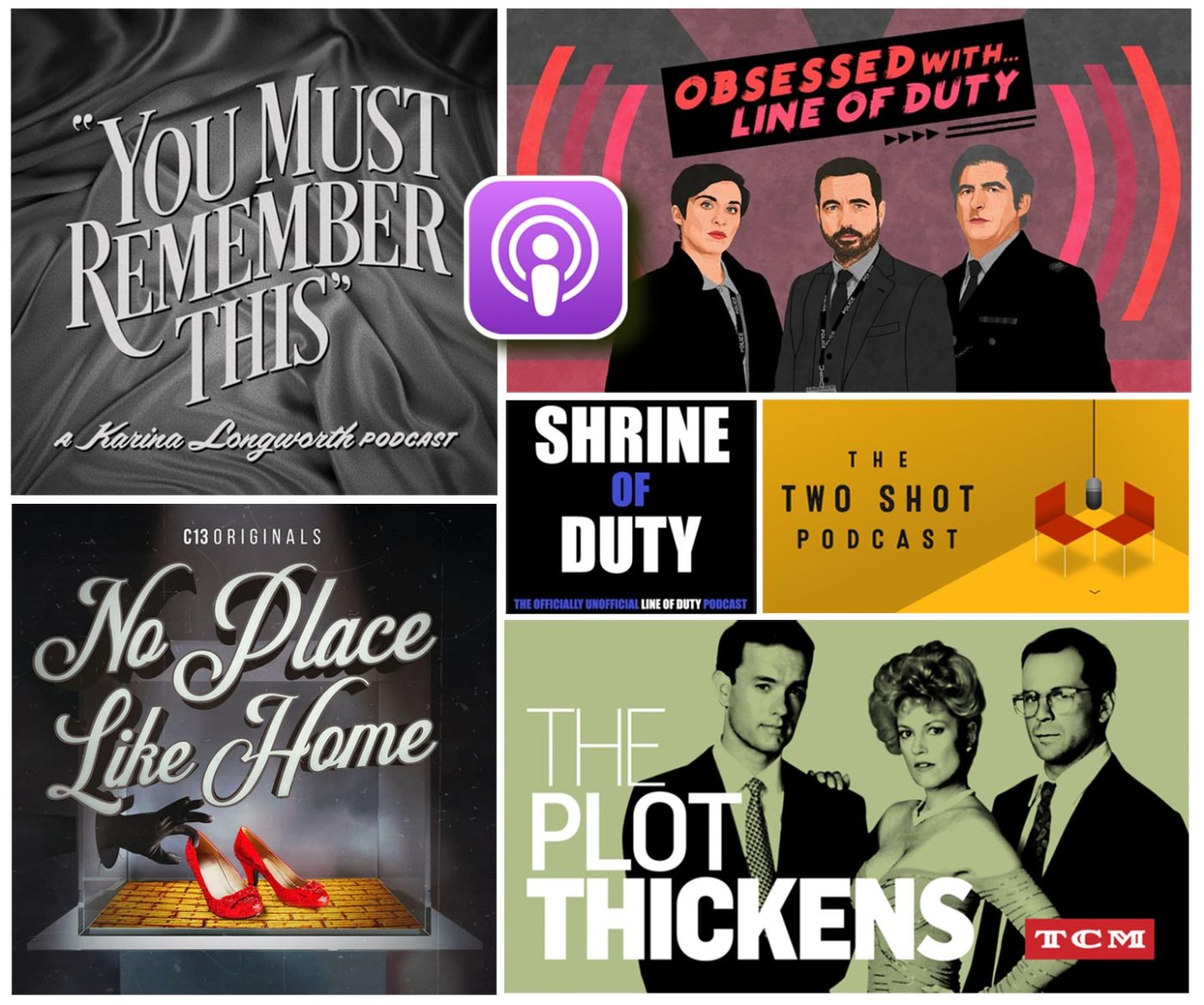 I walk every day. Some days it’s as little as two miles, some day’s it’s more like today’s 5.5. My goal is at least two miles per day and three times each week, I want to hit my 10,000-step FitBit goal, which translates to about 4.25 miles for me (I’m short). But my overriding goal is 100 miles a month. Last month (June 2021) I hit a little over 136 miles; this month I’m set to surpass that with two days left and over 131 miles already logged.

And most times then not when walking I’m listening to a podcast. I didn’t start out to be a podcast fan; in fact I abhorred them for a long time. Podcasts just seem to bring out the worst in me, with their experts-on-everything demeanor and their often-times open-mic night at the local Comedy Club delivery. But then I discovered Karina Longworth’s amazing You Must Remember This, which delves into the “secret history of Hollywood” over the last century, and I was hooked on that one, at least. (I wrote about my love for YMRT here.) Since then I’ve roamed a little further afield to discover some other ones that have grabbed my attention. Here’s what I’ve been listening to (or in one case, NOT listening to) on my walks these days.

(Before we begin, a note on the aural side of podcasts. For me at least, the sound of the narrator’s voice is very important. If a person has the vocal quality of nails on a chalkboard, I can’t listen. I don’t mean to “voice-shame” anyone, but let’s face it: Listening to a podcast has the added import of actually liking the way a person sounds. You’ve been warned.)

No Place Like Home featuring journalist Ariel Ramchandani and editor Seyward Darby
This eight-part podcast delves into the mysterious theft of a pair of the Wizard of Oz Ruby Slipper props from the Judy Garland Museum in Grand Rapids, Michigan in 2005. Hosts Ramchandani and Darby have done their homework, but their podcasts meander around a bit and quite frankly, their delivery reminds me of the NPR ladies from Saturday Night Live (Ana Gasteyer and Molly Shannon). Each podcast is relatively short and made even shorter by 4-6 minutes of commercials. I think the entire series would have been improved by better editing (there are gaps between quotes and the hosts speaking again) and combining some of the episodes into larger ones. Still the case of the missing Ruby Slippers is a fascinating one, even if (SPOILER ALERT!), it looks like while the shoes are found years after the theft, the thief isn’t. I have one episode left, so maybe I’m wrong. This podcast was recommended by Karina Longworth, but it doesn’t quite reach the level of her fine work (her most recent season was “Gossip Girls,” on Louella Parsons and Hedda Hopper, a fascinating look at “old” Hollywood).

TCM’s The Plot Thickens Season 2: The Devil’s Candy hosted by Ben Mankiewicz and written and narrated by Julie Salamon
TCM (Turner Classic Movies) started their own podcast last year with The Plot Thickens. I ignored the first season because it was devoted to someone I feel is one of the great Hollywood gas-bags, director Peter Bogdanovich. I was also struck at the curious timing of it. At the same time, Karina Longworth (her again) was releasing her latest YMRT season wrapped around Polly Platt (titled “The Invisible Woman”), Bogdanovich’s ex-wife and a person many regarded as being key to his early film successes (The Last Picture Show, Paper Moon, and What’s Up, Doc). It almost seemed like Bodganovich was trying to counter anything bad the Platt series would say about him (and there was plenty bad to be said). The Plot Thickens is back right now with it’s second season, once again featuring a great Hollywood gas-bag, at least as a main part of the story, if not the narrator: Brian DePalma. Author Julie Salamon was granted unprecedented access during the making of the film version of The Bonfire of the Vanities in the late 1980s, which went onto become a huge flop at the box office. She wrote an excellent book on her experiences on-set titled The Devil’s Candy, which I read when it first came out. Now she’s both the writer and narrator of this season of The Plot Thickens, and it’s a fascinating look behind-the-scenes at this notorious failure, which starred Tom Hanks, Melanie Griffith and Bruce Willis. There’s only one thing wrong with this podcast: Salamon’s voice, which sounds like a cartoon character from The Simpsons. I know, that’s awful, but I’m on episode 5 and there has not been a time where I’m not reminded that she is not the person to be narrating this. It’s engrossing, fascinating, and well-written … but not so well-narrated. (Evidently a third season of The Plot Thickens, centering on Lucille Ball, will debut this fall.)

BBC Sounds: Obsessed with Line of Duty and The Two-Shot Podcast both with actor Craig Parkinson
I absolutely love the BBC copper show Line of Duty (read my post on the show here) and was pleased to find out there was an accompanying podcast hosted by none other than Matthew “Dot” Cottan himself, actor Craig Parkinson. Parkinson and some guests examine each episode days after it aired, and some of the guests are great (Elizabeth Day) and some are dogs (comedian Chris Washington), but he also has phone-ins with LoD stars Martin Compston, Vickie McClure, Anna Maxwell Martin, and show runner Jed Mercurio. Parkinson was one of the great co-stars of the first three seasons of LoD, and brought the show to a thrilling (almost) finale at the end of the third season. He’s funny, knowledgable, and a great interviewer, which really shows in his own podcast, The Two-Shot Podcast, which he’s been doing for a number of years now. He interviews creative people from all over, but a lot of actors, including his LoD mates, some to great effect, some not-so-much (oh, Adrian … why do you have to say “you know” so much?). Both are worth a listen, but do watch LoD season 6 one episode at a time and follow it up with Parkinson’s take and scan through The Two-Shot list of guests to pick your faves. (I just found out there’s also a series of podcasts devoted to season 5 of LoD, co-hosted by Brett Goldstein, Roy Kent of Ted Lasso fame! That’s next on my to-listen list.) BBC also has two excellent podcasts based on their hit show The Crown, covering seasons three and four.

Shrine of Duty featuring Hannah O’Connell, Brendan O’Loughlin, and Rebecca Shekleton
Along the lines of Parkinson’s Obsessed with … but nowhere near as good, Shrine of Duty is a fan-oriented take on Line of Duty, again running directly after the weekly episodes of the show. It includes an exhaustive recap, fan theories, quotes from the Shrine of Duty Twitter feed and emails. The three hosts—O’Connell, O’Loughlin, and Shekleton—are clearly devoted fans, but they sometimes get way too sidetracked on their own lives for their own good, especially near the end of season six where they started to appear everywhere in the UK on BBC shows and the like to talk about LoD. Still, their fannish devotion is, at times, part utterly charming and part utterly annoying, but I grew to kinda, sorta love their quirky personalities by the time the season was over.

And one I can’t recommend:
Comic-Con Begins: Origin Stories of the San Diego Comic-Con and the Rise of Modern Fandom
I have a vested interest in this one since I worked for Comic-Con for the past two decades, but I couldn’t make it past the first episode. It’s a bloated, confusing mess of a podcast with seemingly countless people talking about their involvement with the beginnings of the event, most of them unidentified. The producers evidently were aware of this problem and addressed it in an article with journalist Rob Salkowitz, who wrote on Forbes.com: “The result is a bit of a jumble. Speakers are often left unidentified, or introduced very briefly in one episode and never again, although they are credited in the notes to each podcast episode … Having the overhead of audio slates for each speaker would have made the crunch even worse.” Well, yes and no. There’s certainly some parts of the first episode which could have been edited out (do we really need the story of Forry Ackerman being an “honorary lesbian,” something that has absolutely nothing to do with Comic-Con?), which would allow some people to be credited, and some more judicious editing would help, as would being more selective and not including everyone. While I recognize Jackie Estrada and Scott Shaw!’s voices, there is one instance where Jerry Siegel (the co-creator of Superman) speaks and he’s not even identified. And other than Jackie, at least in the first episode, there’s absolutely no one—to my knowledge—currently involved in Comic-Con that was interviewed. The promo for the second episode made it seem like it was devoted to writer George Clayton Johnson, who was a tangential part of early Comic-Cons, and Dr. Timothy Leary, who was a guest. Seeing that former con volunteer Wendy All was a “special advisor” to the podcast series, I know what’s coming: Yet another retelling of All’s story about Leary, which can be boiled down to one sentence: Cute young woman gets hit on by creepy older celebrity, a tale I’ve heard way too many times. No thanks, I’ll pass on the subsequent five episodes.

That’s what I’m listening to these days. How about you?

2 thoughts on “Walking and Listening …”