I went on a little personal quest during Comic-Con 2018. For a while now, I’ve been obsessed—there is no other word—with Fantastic Four #45 from 1965. It’s a book I read when it first came out, and—technically—still own, although it’s present location is with my brother, 2,500 miles away. To find a second copy of that book is a bit pricey, because it was the issue that Stan Lee and Jack Kirby first introduced The Inhumans. Even though the ABC TV series tanked, the Inhumans hold a special spot for comics fans: It was in the beginning of an unprecedented (then AND now) creative streak for Lee and Kirby (or any comics creator or team of creators), which saw the birth of not only the Inhumans, but the Silver Surfer, Galactus, the Black Panther, and more, all within the space of about a year. The Fantastic Four was Marvel Comics’ flagship title, and it has never been better than it was from issues #44-94, right before Kirby left to go to DC Comics and start his epic Fourth World saga (Forever People, New Gods, Mister Miracle, and—believe it or not—Superman’s Pal, Jimmy Olsen).

I found a copy of FF #45 at Comic-Con this year, at a fairly reasonable price and in decent condition. That cover is probably one of my favorite Kirby covers ever (and probably my fave FF cover) and the last panel of the book—introducing the leader of the Inhumans, Black Bolt—blew my 10 year-old-mind.

Over the years, I’ve collected Marvel’s reprint series, Marvel Masterworks and recently upgraded to their new format, Marvel Epic Collections. I have a lot of these FF books reprinted, and the reprints are—for the most part—cleaned-up and much more “perfect,” printing-wise, than the original Marvels. Looking at FF #45, I realized how badly the Marvel Comics of that era were printed: Colors off-register resulting in blurry art, shoddy newsprint paper that feels like it’s a few years away from being a pile of dust, but—on the plus side—that old comics smell. (If someone bottles it, they can call it “Nostalgia.”) But this is what we had, and we didn’t know any better, and besides that, the real charm and appeal was on the page. It didn’t matter how it was printed or what paper it came on … the story and art were the thing.

Marvel was famous in those days for building a community of fans through its comics, including via letters columns and their “Bullpen Bulletins” page in each issue. In 1965 there were 10 Marvel Comics that featured superheroes: Amazing Spider-Man, Avengers, Daredevil, Fantastic Four, Journey into Mystery (Thor), Sgt. Fury and his Howling Commandos (okay, not a superhero, but a war comic), Strange Tales (Nick Fury, Agent of S.H.I.E.L.D. and Dr. Strange), Tales of Suspense (Iron Man and Captain America), Tales to Astonish (Sub-Mariner and the Incredible Hulk), and X-Men. And you kept up with each month’s comics by reading these pages, finding out what was coming out, and what to look forward to picking up.

That copy of Fantastic Four #45 that I purchased at Comic-Con was cover-dated December 1965 (like the issue of Avengers #23, pictured at right), which meant it probably came out in September of that year. (Comics were cover-dated three or so months in advance in the hope that retailers—which were newsstands, mom-and-pop grocery stores, drug stores— NO comic book shops!—would keep the books displayed longer.) So What If, I asked, in the great comic book tradition, I found all 10 Marvel superhero comics from that one month in 1965, all cover-dated December? I would have a microcosm of Marvel Comics.

And off I went. During Comic-Con I found all 10 of them, and purchased 8 of them. Two of them—Amazing Spider-Man #31 and X-Men #15—are a bit pricey (Spidey has the first appearance of Gwen Stacey and Harry Osborne … not sure what the deal is with that particular issue of X-Men). As usual, I looked for solid reading comics. I don’t believe in “mint” books and I find the practice of having books “professionally graded” and sealed in plastic abhorrent (don’t get me started).

Today I sat down and looked through the 8 comics I purchased and re-bagged and boarded them (comics collecting is horrible for us OCD-types … it all has to match, dammit!). The Marvels are a bit annoying date-wise; while they’re all cover-dated December—some of them seem to be ahead (or behind) the others. The Bullpen Bulletins pages don’t match up, the Mighty Marvel Checklist and house ads show different cover-dated books as being on sale NOW. So the December cover-date thing is a bit of a misnomer.

But the bottom line is this: This is, essentially, one month of Marvel Comics from fall of 1965 (minus the romance and western titles), a small time machine with a one-way trip to the past, a past in which you could go to your favorite newsstand and buy these 10 books for $1.20 (12 cents each!). I was 10 in 1965, probably just starting fifth grade when these books came out. They contain such an incredible rush of nostalgia for me, and even though my brother has some of our original run of comics from that era, which we purchased off our local newsstands—including Fantastic Four #45—having this small run of books warms my tired, old heart. They are evidence of a renaissance in comics, a time of incredible creativity (from just a handful of creators) that spawned a multi-billion dollar franchise that is still going strong today and known the world over. They’re also remnants—let’s say mementos—of my childhood and reminders of a real, vibrant sense of wonder that I like to think I still possess.

It’s true: As you grow older, the fondness for the things of your youth increases. We all have our own private Rosebuds, locked away somewhere for whatever reason. This is one of mine, a small stack of aging newsprint with fond memories embedded therein.

Oh, and they look great on my spiffy new spinner-rack, too. After all, presentation is everything. 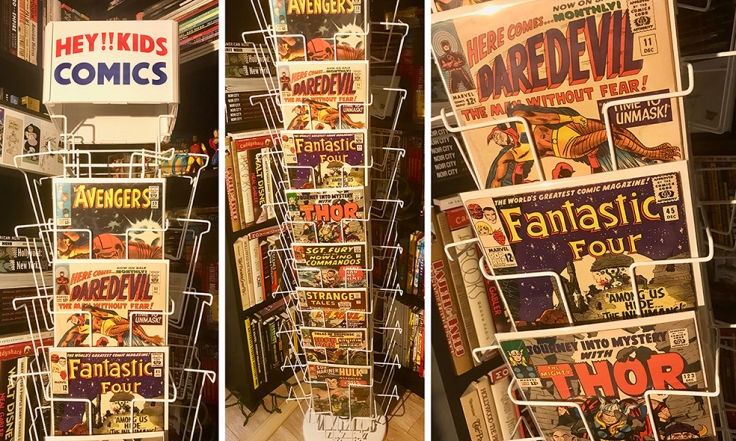