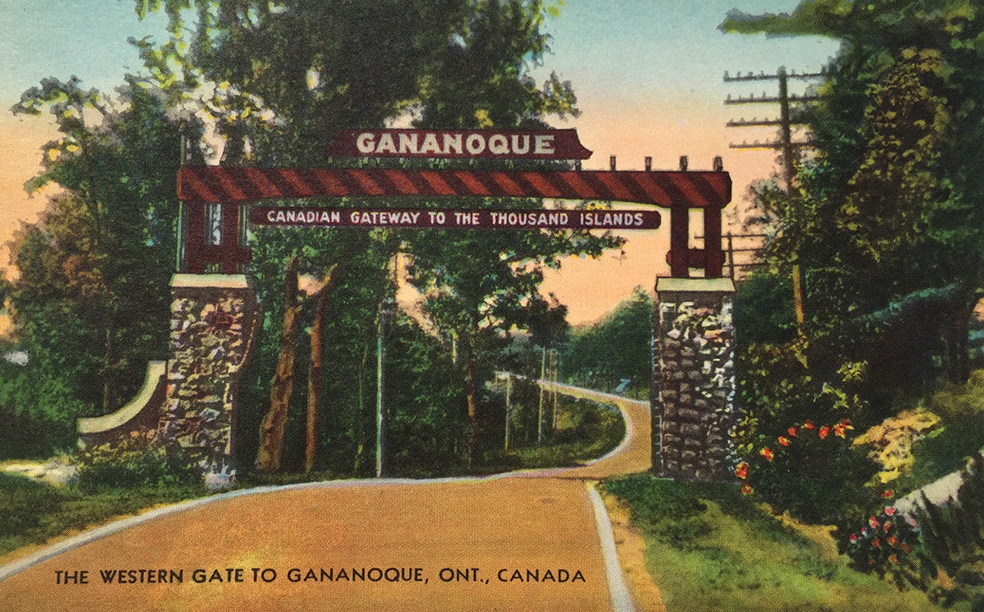 I took a trip this past weekend via the crowded freeways of Southern California. I drive so little these days (I literally live a block from where I work, so I “commute” each day via my feet), that the traffic in SoCal, particularly the Los Angeles area and Orange County, is a huge shock to my system. I don’t know why … it’s always been this way.

But for some reason it made me think back to childhood vacations, particularly the two or three years we journeyed north to Canada for a fall weekend at the 1000 Islands. Our normal vacation spot was the Jersey Shore, where we visited each and every summer from the time I was a toddler to the time I could almost have toddlers of my own (my last visit with my family was 1976, I believe, when I was 21). But one fall day my dad got the bright idea to go to Canada for the weekend.

It was right after Interstate 81 had opened. I-81 (or if it was in California, THE 81), runs north-south from Canada to Tennessee, where it hooks up with Interstate 40. I-81 ran pretty much right by my hometown of Tamaqua, so driving up to Canada only took a few hours. My dad had fished a lot in Canada (specifically Northern Ontario, in a town with the somewhat-frightening name of Calabogie, which somehow became “Calla-Boogie” in our family discussions), but instead he decided we would stop and stay at Gananoque, a small town just across the Canadian border.

My parents would pick me up after school on Friday and we’d make the journey northward. The first couple of years we went, we experienced some delays in Syracuse due to continued construction on I-81. But once that was done, it was smooth sailing to and from Canada. We stayed at a little motel in Gananoque called Appleby’s, run by a little old man who always remembered us in subsequent visits. The motel was old and drafty, but clean and convenient.

Gananoque was a small town with three Chinese restaurants in it, the Century, the Modern, and something else that I can’t recall (the restaurants appear to be gone these days). We tried all three, but we were not a Chinese food-eating family. Ordering food such as hamburgers and fries was a risky business at some of these places, and we quickly decided on one restaurant as our main one … the Modern, if I recall correctly. All three restaurants were run by families, and they would sometimes have titanic battles with each other, yelling and screaming in Chinese. Usually this was between the waitresses, who never wrote anything down, and seemed to understand little or no English. The restaurants were old, with wooden booths with the coat hooks on the pillars between them. I remember getting ice cream for dessert served in a stainless steel dish.

Usually on each trip we’d take Saturday and drive to the next biggest town, Kingston, Ontario, and shop there. I recall being taken aback by how different everything was. Cars had different names in Canada; our Chevy Impala may have been the exact same model and look, but it had a different name; Sears-Roebuck was Simpsons-Sears. (I kept fretting about what happened to Roebuck … where was Roebuck? Little did I know he’d soon disappear in the US, too.) I remember encountering an early comic book shop in Kingston, more of a head shop really, and the shock of my parents over some of the comics for sale there (“Let’s go, Gary. NOW!”) I saw my first traditional fish and chips wagon on the street there, too, selling the greasy fries and fish fillets wrapped in the traditional newspapers. I was shocked … all that grease and all that newsprint, soaking together?

One time, as we drove along the St. Lawrence River, dotted with small islands, my mom asked the question, “Why don’t they float away?” My mom was like that, a little dotty at times. My dad gently explained the island concept to her, but I don’t quite think she got it, to be honest.

On Sunday, we’d make the long drive home (I recall it as 4-5 hours) and we’d stop in Cortlandt, NY, at a large glass and chrome diner right off the Interstate. It was about at the halfway point on our journey. My parents were big on diners and cafeterias when we would travel. We’d eat lunch and hit the road. My favorite there was turkey croquettes.

I don’t quite recall how many years we traveled to Canada like this on cool fall weekends. I think there was a time when I hit ninth grade or so and thought I was too cool to go away with my parents for a weekend, and I stayed at home, and that may have been the last time they went. I remember my brother only going with us once and being terribly bored with the whole thing.

I’m not sure what triggered these memories in me. Sitting in traffic on a hot day in Orange County on the 405 is about as far away from the placid and chilly fall-like atmosphere of southern Canada 45 or so years ago. Either way, those are fond memories of a time long gone.

I hope none of those 1000 islands floated away. Has anyone counted them lately?

One thought on “Traveling Man …”