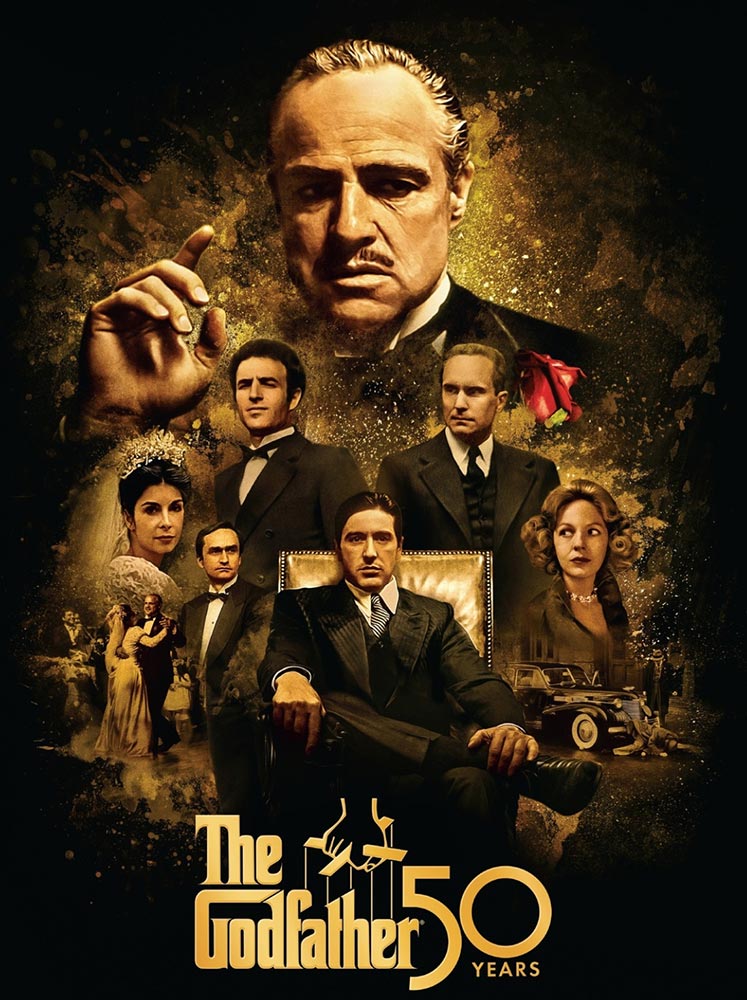 In the fall of 1972, I was all set to see The Godfather in my hometown theater, the Victoria. I had made a date with the younger sister of a classmate. She was a freshman, I was a senior, and even though I had an unrequited crush on her older sister, I reveled in that ages-old, rarefied high school power dynamic. I thought the younger sis was the next best thing: coal-black hair cut in a short bob, beautiful dark eyes just like her older sister, and—a rarity for me—she was shorter than me. She had just broken up with her much-taller basketball-star boyfriend and it just seemed to me to be a case of the stars aligning. I asked, she said yes, and we were all set for The Godfather on a chilly Sunday evening in October.

Of course, she stood me up, but in retrospect, a 3-hour movie about the mob—killing, conniving, betraying, and assaulting each other—was probably not the best choice for a first date, nor was the venue. By that point in time, the Victoria was decidedly down on her heels, with a closed-off front section so you wouldn’t encounter any of the rats that reportedly had taken over. (Why the management thought the rats wouldn’t go past a 2×4 draped over the arms of the seats, high above the floor, was beyond me, but hey … I never did see a rat in the Vic.) I also never did go out with my friend’s little sister, nor did I ever see The Godfather on the big screen. Until yesterday.

Probably Marlon Brando’s greatest role, and one no one—except for Francis Ford Coppola—wanted him to have: Don Vito Corleone in The Godfather.

It’s hard to believe The Godfather is 50 years old. Francis Ford Coppola’s epic on the mob went on to become one of the most lauded and beloved movies in motion picture history, with numerous quotes from the film entering our daily lexicon, the main one being, of course, “I’m going to make him an offer he can’t refuse.” (Another of the more famous ones, “Leave the gun, take the cannoli,” was actually an ad-lib from actor Richard Castellano (Clemenza). The original line in the script was just “Leave the gun.”)

The Godfather’s path from book (by Mario Puzo) to the screen is a tortured one and that journey is recounted in an excellent new book, titled after that famous Castellano ad-lib: Leave the Gun, Take the Cannoli: The Epic Story of the Making of The Godfather by Mark Seal. It’s a fascinating story, one that I reviewed just last month (click here to read it), and a story that’s going to be—kinda, sorta—retold in a new TV mini-series unrelated to the book, called The Offer, which premieres on Paramount+ in April. This version is told from the viewpoint of The Godfather producer, Albert S. Ruddy, who was basically assigned to the film to keep it on-time, under budget, and in-check. (I believer Coppola has referred to him as “the producer who was never there”). Seal’s book chronicles the near-chaos of the shoot, especially the lack of faith in Coppola as director, his casting decisions (the studio didn’t want Brando or Pacino), and the power struggle between him and studio head—and famous Hollywood windbag—Robert Evans.

But I digress. As I mentioned early on, yesterday I finally saw The Godfather on the big screen. It’s been re-released for a limited run, and I saw it in one of AMC’s Dolby Theaters here in San Diego. Here’s the thing about the Dolby Theaters: Besides superior projection, it’s all about the sound. I don’t know about you, but I do not want to FEEL sound. I don’t want the bass end of the soundtrack so loud that my chair vibrates. When I was director of programming for Comic-Con, I was constantly telling the techs to turn down the sound in Hall H—it was so loud in tech checks that my entire body beat along with it. (In their defense, they were right when they told me it would be much different when the room was filled with 6000+ people, absorbing all that sound.) Thankfully, the movie itself did not have a lot of big moments where my chair shook. The previews (all 8 of them) … that was a different story.

This is yet another restoration of The Godfather, bumping it up to 4K for this limited release and an upcoming 4K Blu-ray release, and the movie looks great—sharp and dark, just as Coppola and cinematographer Gordon Willis intended. The movie itself elevates and classes up the novel by Mario Puzo, which by itself is a potboiler, a pulpy, sexy, violent, summer beach read. Coppola as director brings a strong feeling of Italian culture and lifestyle to the movie, especially in the extended wedding scene that opens the film, and the christening scene that all but ends it (in more ways than one). It’s the definitive story of the rise of Michael, the son who didn’t want to be in the family business. And while I can take or leave the scenes in Sicily that are precipitated by Michael’s killing of McCloskey, the crooked police captain, and Sollozzo, the drug dealer, I now realize the death of Michael’s young Sicilian wife, Apollonia, is what hardens his heart and makes him the ruthless bastard he is by the end of the movie. And, oh, that murder scene with Al Pacino, Sterling Hayden, and Al Lettieri! It’s Michael’s official induction into the Corleone Family and—for me, at least—one of the most suspenseful and thrilling movie scenes ever. The sit-down dinner, the conversation in Italian without subtitles, the trip to the toilet—is the gun there or not?—the elevated train shrieking outside the restaurant, Michael’s return to the table, and the blood boiling in his brain, resulting in the brutal murder of both men is a high point of cinema. Even though you know what’s coming, the editing, the sound, and the acting always surprise me and make my heart beat faster. It’s filmmaking at it’s finest.

I hate The Godfather III (or whatever Coppola is calling it these days). And while I love The Godfather, I think The Godfather Part II is the better film, especially the parts about Michael, including his consolidation of power in Las Vegas, his dealings with Hyman Roth, and the Cuba scenes where he realizes it was Fredo “all along.” I think it’s a superior film. In 1977, Coppola edited a 7-hour “Godfather Saga” for NBC that retold the story of the original film and Part II in chronological order (I believe AMC also showed this more recently as “A Novel for Television”), pre-Godfather III. While I think the Robert DeNiro’s early Vito Corleone parts of Part II are the weakest part of that movie (but still well-done and fascinating), and starting a 7-hour extended viewing with these scenes doesn’t bode well, I would love to see this version again. I owned it on VHS years ago, purchased on one of my 1980s visits to NYC and a magical store at 49th and Broadway called Video Shack, which had thousands of new VHS tapes for sale. This was a massive boxed set (I remember returning with it in its own bag on the plane, protecting it like it was some kind of Holy Grail … it cost $89.95, if I remember it correctly, a lot of money for me in those days). I would kill to have this again on Blu-ray, but I don’t think Coppola is interested in this kind of bastardized re-edit of his magnum opuses.

I thoroughly enjoyed seeing The Godfather on the big screen, finally, minus Dolby’s vibrating chair trick during the previews and even without my classmate’s little sister. If it’s playing anywhere near you, I wholeheartedly recommend you try and catch it in this limited theatrical release. I hope they re-release The Godfather Part II in 2024, when it’s that film’s 50th anniversary in the same way. Seeing it in a theater will be another offer that I can’t refuse.