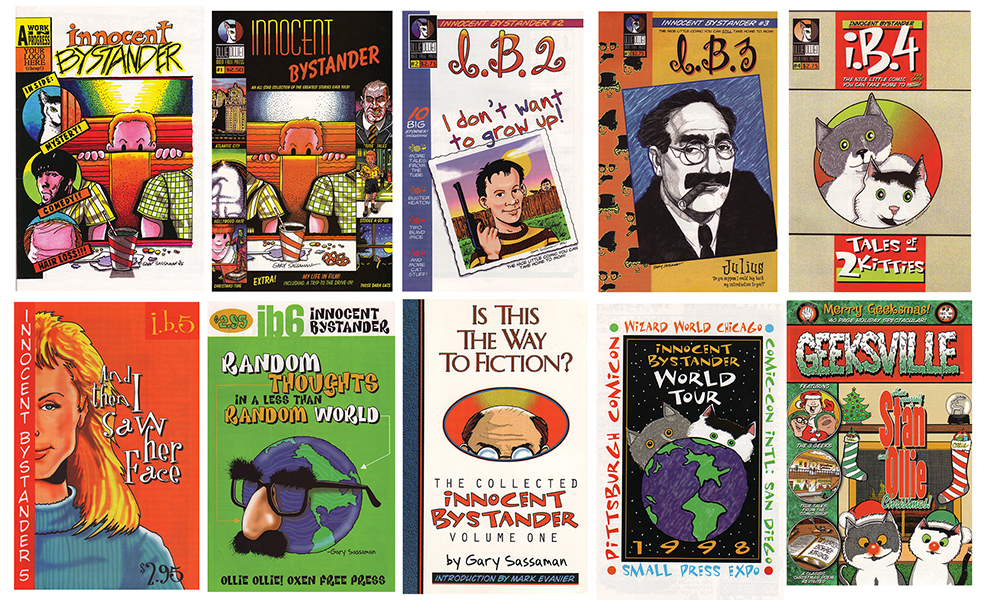 The name of this blog is not something I pulled out of a hat. 20 (!) years ago, I started publishing my own comic book … it was called Innocent Bystander. When I started a blog in 2004 (you can visit the first version of it by clicking here), I carried the name over. By this point in time, I figure it’s mine, all mine (although there is a wine company who would argue with me, I guess), so I finally got the URL to go with it (although truth be told, I had it many moons ago and let is lapse) when I restarted my blog just recently.

The name of the comic came from the fact that I felt like an innocent bystander in my own life. Things seemed to happen around me, not to me. That, of course, was a fallacy; everyone, including me, is an active participant in their own life, whether they want to be or not. But for me, at least at that particular moment in time, it was the perfect name for a comic that was basically about me and my experiences.

The other day I dug out copies of all six issues for a friend who had yet to see the book. And for the first time in years, I actually sat down and read them all over again. The first shock was that #1 came out in 1995, 20 years ago. While I probably started working on it in 1993 or so, it took a year or two to get my act together to publish it. When I reread it the other night, I realized how embarrassing it was, even though it had its good points. Issue #2 was a bit better, partly because of the lessons I learned off of issue #1: Better paper and no hand-lettering. At that point in time, computer fonts that looked like comic book lettering were just coming into existence, and I immediately switched to that, even though two prominent indie creators of the time chastised me in letters about it (and then one of them promptly chastised me in an additional letter for printing her letter in the first place).

Issue #3 featured the Marx Brothers, and that was the turnaround issue for me, the point where I found something good to talk about and my work improved because of it. Part comic book documentary, part personal experience, the Marxes meant so much to me in my formative years that I just had to write about them. #4 continued the “one book, one theme” format with an issue devoted to my cats, Stan and Ollie (who are sadly long gone). Issue #5 centered on my first long-form story, titled “Then I Saw Her Face,” which featured the triumph and tragedy of first love and the eighth grade dance (and maybe a little too much honesty). And #6 went back to the scatter-shot format of the first two issues with various short stories, but contained some of my best drawing work (I think). You can see a real progression from issue 1 to issue 6 when it came to the art and design of the book.

More was planned, but I up and quit my well-paying (but stressful) TV job of 18 years and moved across the country, not knowing a soul or having a job. (Kids, here’s some advice: Never quit a job until you have a new job … and oh, don’t do drugs). I had plans for an all TV issue, based on my years in television news (something I touched on in issues 1 & 2), and a special standalone issue called “Fuzzheads,” featuring “those lovable IB cats, Stan and Ollie.” I also started a book about the cats that I was sure every publisher in America would want to publish. They didn’t. (I guess I was a cat comics pioneer … all of this happened pre-Internet. Back then the only cat cartoonist was B. Kliban, and he died in 1990, evidently leaving behind a wealth of material, since there’s a calendar every year since then).

What happened next was I met Rich Koslowski, the creator of The 3 Geeks, and he and I teamed up for a book called Geeksville, which featured both of our stories in one book. We published 3 issues on our own (those 3 issues contained some of my best work, I think), and then at Comic-Con in 1999, Image Comics made us an offer to publish the book. We published 7 issues with them, but the minute we went to Image, the bloom was off the rose for me. Two things happened around the time we published our first issue (#0, since zero issues were all the rage back then): I got a job at Comic-Con as the director of programming, and all the joy of creating comics drained out of me once we went with Image. Image Comics then was not what it is now (now it’s the most creative and creator-friendly company in American comics … I would be honored to be doing a book with them now). Slowly my output and interest dwindled, like air escaping a slowly-leaking balloon. For 2 issues I relied on my friend Caryn to write stories about her somewhat bizarre childhood that I just drew and lettered. By the last issue, I think my contribution was a color back cover piece that I had created as a promotional postcard much earlier (seen at left).

When I look back at all this now, from a comfortable perch of 20 years later, I realize a number of things. I was going through an early midlife crisis (I had just turned 40), and I desperately needed a creative outlet. I realize now I was never really an artist; I was a storyteller. My writing was always stronger than my drawing, and I would get incredibly frustrated and impatient with not being able to translate what was in my head to what I wanted on the page. (One review at the time, called my artwork “timid.” I wholeheartedly agree).

In the long run, Innocent Bystander, the comic book, was a failure, at least from the standpoint of sales. I lost my shirt. I can safely say now, I racked up over $15,000 in debt trying to make this work. In 1998, when I left my job as a television graphic designer in Pittsburgh, PA, I took half a year to try and make this comic book career thing work. I published 3 books in 6 months (IB 5 and 6, and a trade paperback collection of the first 4 issues, which you can still find in various comic book stores throughout this great land of ours), and did 4 conventions (Pittsburgh Comicon, WizardWorld Chicago, San Diego Comic-Con—little did I know what was in the future for me with that particular con—and SPX). But … and this is a big but … it did garner me some fans from around the world, some of whom were very vocal about their love of the book and my work. I received a fair amount of mail and it was all very nice and kind and thoughtful. And I got mostly positive reviews. If the Sally Field Oscar line (“You like me, you really like me!”) wasn’t such a hoary old cliché, I’d be tempted to use it here.

Eventually, I realized it was time to move on and start over and stop spending money on something that just wasn’t going to happen for me. So I loaded up the truck and moved to Beverly. Hills, that is. Swimmin’ pools, movie stars. (Well, actually it was a Honda CRX and I came to San Diego, where I’ve been ever since. I’m still amazed by palm trees, by the way.)

A few years later, I entered the comics industry by a side door, and I’ve been in it ever since. Every once in a while I’ll meet someone who remembers Innocent Bystander, the comic book. The most recent was a fellow Pittsburgher, Ed Piskor, who won an Eisner Award this year for Best Reality-Based Work for his Hip-Hop Family Tree. It’s nice to be remembered, especially by someone so talented and committed to his comics work. (Yes, I name drop.)

It’s also nice to look back at this portion of my life with a certain amount of fondness. I’ll never feel the money was wasted. I’ll probably never (I stress that word “probably”) ever do a comic book again, or an online strip, or even draw something. But those few years that I did so were among the most satisfying moments in my life. I can honestly tell you there’s nothing like getting a shipment of books delivered to your door and opening up that first box. The smell of ink on freshly-printed paper—mixed slightly with blood, sweat, tears, and money you’ll never see again—is something one never forgets.

Top image: The world of Innocent Bystander circa mid to late 1990s. Top row (left to right): The “Ashcan” issue I prepared to try and find a publisher (which resulted in the decision to self-publish); Issues 1 through 4. Bottom row (left to right): Issues 5 and 6, the first trade paperback (there never was a second), the “World Tour” catalog I prepared for the 4 conventions I exhibited at in 1998, and the cover to Geeksville #3, the Christmas issue, and the only Innocent Bystander cover of that series. All art © Gary G. Sassaman.